Published 11:12 AM EST Dec 21, 2017Ron Hamilton never set out to be Patch the Pirate.A serious composer of formal church music, Hamilton never dreamed he'd become a children’s musician wearing the uniform of a ship’s captain and talking about scurvy and doubloons. But he lost his eye to cancer in 1978 and children began to see him as a pirate, so he became one and sold a boatload of records.Once he trusted in the winds that carried him, Hamilton found a thriving career that reached children.The next blow would be tougher. In 2013, Hamilton’s son killed himself after years of struggle with mental health issues. The family’s public struggle and acknowledgement of mental health issues has reached people around the world and opened new hearts to their messages, said Shelly Hamilton, Ron’s wife and musical partner.“Losing our son has been the hardest thing we’ve had to deal with, but we know he’s well and he’s with God, so that’s a comfort that we’ll see him again in heaven,” she said. “A loss like that is traumatic but when you can turn it around and make it a positive, I think people are really drawn to that.”Now Patch, along with his family, face a new challenge: Hamilton’s early onset of dementia.It’s all beyond his control. It’s part of God’s plan. The winds will carry them and the family trusts this latest test will only make them stronger.

JOSH MORGAN/StaffA pirate is bornAnchored in a Greenville strip mall, the Hamilton family runs a sheet music store, Majesty Music. For years they have composed hymns, including the popular “Rejoice in the Lord,” and recorded albums. They record albums for children with the Patch the Pirate line and for adults as the Hamilton Family.In the late 1970s, Hamilton was struggling to see his music students and went to see an eye doctor who found cancer. His left eye had to be removed.“We didn’t know if it had gone to his brain,' Shelly Hamilton said. 'And if it had gone to his brain, the doctors couldn’t have done anything for him.' He worked with his father-in-law, who operated Majesty Music. With so many adult compositions, they didn’t have anything for kids. After the surgery, kids saw Ron Hamilton at churches and began calling him a pirate because of the patch.“God chose to spare his life, he became Patch the Pirate,” Shelly Hamilton said.Hamilton and his wife put together 16 songs for the first Patch recording.“At the last minute we weaved it together. I said, 'let’s get some characters and I’ll be Patch,'” Ron Hamilton said.His partner in piracy, the character Sissy Seagull, was another accident that worked out.“I woke up with laryngitis,' Shelly Hamilton said. 'I woke up and I could barely speak, but I could squeak and squawk, so I became a seagull.' The album began to sell.“The kids said, ‘We need another one,’” Ron Hamilton said. “The parents said, ‘We need another one, too. I’m sick and tired of this.’ So we’ve been doing one a year for the last 38 years.”In 1982, Patch the Pirate visited space for his second adventure. 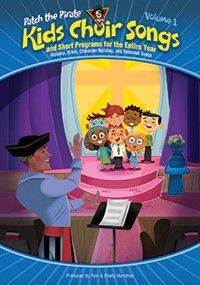 The Hamiltons came up with a more focused plot, rather than a collection of songs, and incorporated their children, who would soon swell the ranks of the pirate’s adventures.Since then, the Hamiltons have kept setting sail, releasing a new Patch the Pirate album nearly every year. It’s become a tradition for families.“We have seven children,” said Natalie Grzybowski, who came to the Majesty Music store on Wade Hampton to get a Christmas gift. “My 15-year-old asked this year if we can get the new one. They’ve always known Patch.”The pirate has now been a missionary in jungles, visited England, traveled through time and raced down the “MisterSlippy River.”After so many years and so many adventures, even a pirate gets tired.“It’s something that I thought might end because Ron and I really have not been writing too much anymore,” Shelly Hamilton said.